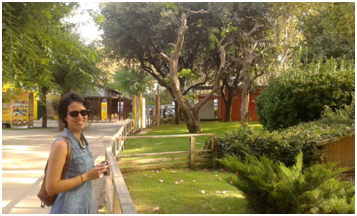 The Convention on Biological Diversity (Rio 1992) encourages the countries around the world to protect biodiversity. Biodiversity or biological diversity has various levels which are genetic diversity, diversity of species and ecosystems.

Zoological gardens have been regarded as important institutions that have or are changing from mere exhibitors of wildlife to contributing directly to conservation. Although the best strategy for the long-term protection of biological diversity is the preservation of natural communities and populations in the wild (in-situ conservation), ex-situ conservation can also play a crucial role and to achieve such an aim zoos will play an essential part. They contribute, as we have said, to the preservation of biodiversity. Endangered species are keeping in order to stop the loss of biodiversity and zoos also work together with other zoos.

Zoo conservation biology use elements of four main disciplines; these are captive animal management, small population biology, re-establishment of populations in the wild and relaying the importance of all this through the active education of the visiting public. This educational work is a very important aspect. The zoo animals serve as ambassadors with the purpose of building community awareness of the seriousness of the threatened species and its importance in the biodiversity and the ecosystems.  With the appropriate information (informal learning or formal learning e.g. schools), and with the assistance of the animals, the zoo visitors are made aware of the vulnerability of ecosystems. The ambassador animals usually include animals of an endangered species, which address the audience emotionally and arouse interest.

In my project I want to evaluate conservation learning at zoos with a detailed analysis about the actual role of zoos in raising people awareness of the importance of maintain biodiversity and the dangers of biodiversity loss and species status.
I measure the knowledge of biological facts, threats and red list category in a comparative study throughout European countries between two groups: zoos visitors, and people who do not visit zoos. In a second step I want to detect how zoo visitors processed zoo information (if they processed it) and if there are any differences to the general population (and between countries).

Participations in summer schools and other courses