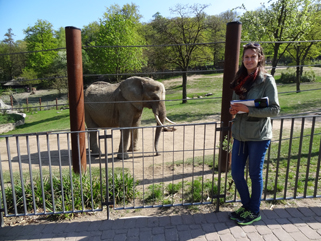 My work in the field of Zoo animal biology and my research program on Zoo elephants began with the thesis that I wrote on the integration of a young Asian elephant bull in a young male group in the Zoo Heidelberg. After completing my diploma degree in biology I continued to work in various zoos  through several internships. To expand my knowledge of biology, in particular the behavior of elephants, I watched African elephants in their natural habitat for three months.

Since February 2015 I have been working in the Working Group "Zoo biology" of the Goethe-University of Frankfurt. I am responsible for the organization of the master module INS- D1 "Behavioral Biology in Zoos" on the one hand. On the other hand, I am investigating the behavior of Zoo elephants as part of my doctoral project. A goal of my research is to build of a multi-institutional longitudinal study of various aspects of the behavior of Asian and African elephants in zoos. Another aim consists of studying the effects of enrichment on behaviour of elephants, taking into account the "personalities".

Building a multi-institutional, longitudinal study of various aspects of the behavior of Asian and African elephants in zoos

The planned long-term study in various elephant enclosures will supply basic behavioral data, which will be the basis for well-being enhancing changes in management. Activity budgets and habitat use as well as feeding and social behaviors will form the key points of the study, because these related behaviours, taking into account the biology of elephants, can serve as indicators of well-being. Because of the complex social system of elephants, a high level of affiliative social behavior, little aggression and the existence of social relations in a Zoo group will be adopted as indicators for positive wellbeing. The food preparation methods in turn seem to be acquired through social learning, thus effective food preparation methods may represent an intact social environment and thus a positive environment.

Study the effects of enrichment on behavior and physiology of elephants, taking into account 'personality'

In the Zoo, enrichment has the goal to provide the animal with more choices and to give it more control over its surroundings through a varied and stimulating environment. Most animals that are adapted to highly variable environmental conditions and have a complex social structure need adequate stimulation. Both properties apply to elephants. But not every measure intended as enrichment enhances the lives of Zoo elephants. Therefore, effective enrichment for elephants should be based on the consideration of their biology and individual consistent behavior differences ("personality differences"), as well as on the evaluation of the effects on the behaviour and physiology. Using a before and after comparison, the influence of various enrichment programmes will be investigated. Activity budgets, social behavior and expression behavior will be considered as behavior indicators. Changes of cortisol levels serves as a physiological reference.

Participations in summer schools and other courses